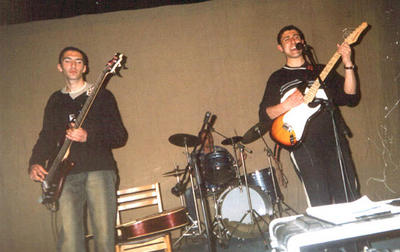 Last Saturday evening while in Vanadzor Ariga told me that we had been invited to hear a rock band rehearse new material. The band’s name is Eveapple, founded by Marat Avedisyan (see above photo).

We found the band in the basement of an elementary school in the city’s downtown area. The room they were in contains all sorts of film projection and editing equipment, as well as an archive of thousands of films, mostly in 16mm format. In the middle of this stuff was their audio equipment, which comprises a haphazard network of archaic Soviet-era amplifiers, including those of standalone phonographs. When we walked in a couple of the band members were trying to solder some wires together in order to make the proper connections from one point to the other.

Although their equipment is limited in terms of quality (and functionality), the music that we heard was not. The band’s music is fresh sounding to say the least, and very little can be compared to its rock-pop sound from what I’ve heard in Armenia. I don’t want to identify them with a worldly, mainstream band, as this would be unfair, but I will say that their music is definitely radio friendly. The band is a five piece, with lead, rhythm, and bass guitars, keyboards, and drums. Incidentally, the drummer David Grigorian played with the now defunct Lav Eli, an excellent band also from Vanadzor.

We were privileged enough to hear three of their songs going through constant manifestations in the development process, with harmonies frequently changing in order to find the right sound. It was really extraordinary to hear and watch.

Most if not all of the lyrics are written by Marat, while most of the music is written by all members. And most of their songs are sung in English, although one of the songs that appear on an undistributed 5-track EP disc is performed in Armenian. The problem the band has now is marketability, as it still needs to find its audience. Marat explained that “rabiz” pop music is still the mainstream, whereas it seems to me and Marat agrees that rock enjoys cult status here, as the music form has negative connotations associated with it for some reason. Thus, he is not banking on making it big in Armenia, unfortunately.

On Sunday night after returning to Yerevan I went down to the Stop Club on Moscovian Street near Brusov Institute to hear Bambir for the third time. They were playing an unexpected “acoustic” set, although their guitars were still plugged into amplifiers and their drummer occasionally pounded away on his drum kit. They sounded really great that evening with the guitars toned down a few notches, and they performed their usual set of original songs as well as rock covers by the Rolling Stones and the Beatles. I want to note here that their flutist, Arik Grigoryan, is fantastic. Sometimes I hear a tinge of Rahsaan Roland Kirk in his playing, especially when he’s soaring without seeming to take a breath and starts moaning in unison with the melody.

Stop Club is actually a place where I was encouraging Eveapple to perform in—hopefully they will make their way to Yerevan more often. Their music is definitely needed here.

Recent Posts
Local Elections Were Held Last Weekend
Photos from the Wedding
More About the Wedding
The Yerevan Zoo Should Be Shut Down
Here Comes the Bride....
My Building Was on Fire
Only 5 days left…
Yesterday I was pulled over...
The Wedding Suit
‘Tekh Osmotr’