For the last couple of months we've been finding these bizarre-looking inquisitive bugs in our bathtub and bathroom sink in the mornings. They have a prehistoric look to them, like the kind of insects you would find in the stone fossils they hand out to students to examine in eighth grade.

I would see one of these gliding about every so often, but never on a daily basis. Cockroaches were always greater in number, but strangely enough I haven't seen one on weeks. These guys are obviously drawn to the bathroom fixtures because of their attraction to humidity and they can't resist a hot morning shower apparently because at least one appears near the drain of the tub waiting for me.

They seem to be coming from the upper floors as I saw a few of them crawl in a chain on the bathroom ceiling last week, making their slow migration to the tub. On two occasions entire families were running around--microscopic babies, teenagers, even the grandparents. Some of them were hiding under the bathtub mat. 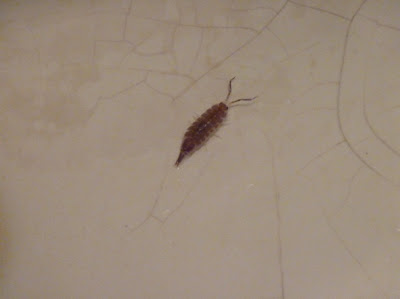 It's hard to get them moving under a steady jet from the shower hand nozzle. Once they suspect they're about to be washed away they use their ten legs as suction cups, deftly and defiantly adhering to the porcelain at any angle. Sometimes it takes a minute or two to set them on a new course of uncharted aquatic depths.

If anyone happens to know how these critters are called, please tell us in the comments section.
Email Post
Labels: Armenian bugs

Marash Girl said…
Sorry for that! Enough to make you want to stay dirty! Reminds me of the lizards that used to greet us at summer camp, crawling up out of the drain when we thought we might want to wash up! The lizards dissuaded us quickly!
Tuesday, March 08, 2011

Anonymous said…
Another reason why I would never live there. The list becomes longer.

Christian Garbis said…
That's it. I'm curious as to how these things became household pests, though. And the coloring is a bit off, the ones in my apartment building are sort of silver colored, while the ones pictured on Wikipedia are much darker. Very strange.

Anonymous said…
They look like "silverfish" to my untrained eye.

"Silverfish are a cosmopolitan species, found throughout North America, Europe, Australia, Japan, Asia and other parts of the Pacific.[8] They inhabit moist areas, requiring a relative humidity between 75% and 95%.[9] In urban areas, they can be found in basements, bathrooms, garages, closets and attics."

They are beneficial critters - eat soap scum and other residue. The natural version of Mr. Clean

Ruben Muradyan said…
I, actually, didn't know it's name in English, but knew in Russian.
Then I just followed English Wiki page for it.

Anyway - to cut it short. They are living in wet conditions. So think about better ventilation and proper heating (if they are coming out of bathroom).
Wednesday, March 09, 2011

Anonymous said…
Don't worry, even more-be happy.
First of all when you find bugs(Woodlouse or Silverfish or other ) inside home, it means that place convenient and safe for living.
Second-keep place dry, as it possible in bathroom.
Thursday, March 10, 2011

Asli Omur said…
The ventilation of your apartment, windows, or water leakage, the actual water system, and/or older pipes that have not been cleaned out recently can also be very attractive, dark, moist spaces for critters to gather in &/or breed.

Also, I've learned that there are over 10,000 types of insects that exist within Armenia, quite a lot for a small territory.

From your photographs, I'd gather these are Waterlouse, too, as everyone else is mentioning. In Latin, Asellus Aquaticus. They are found throughout Europe (U.K, Germany, Italy, Slovenia, Russia etc. & of course, as you have experienced, Armenia).

I wonder if the month or season has something to do with them seeking shelter now? In the U.S. spiders, silverfish, weavels, chiggers etc. make their way into peoples homes.
Friday, March 11, 2011

Christian Garbis said…
We have quite a few spiders roaming the house wrapping those things up in their silk to snack on later. But I haven't inspected one close enough to know...
Tuesday, March 15, 2011

Anonymous said…
Linda, no one is forcing or asking you to live "there". "There" has been there for millenia without you, and will manage without you for another few millenia, God willing.
Tuesday, March 22, 2011

TRP said…
It looks like a Woodlouse. We have them here in the Yorkshire Dales in the UK, although ours have a rounded 'bottom'. They are good for eating up other household pests, although they in turn are preyed upon by our spiders.
Wednesday, March 30, 2011