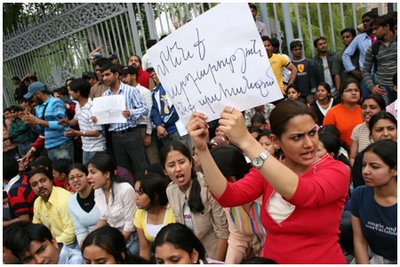 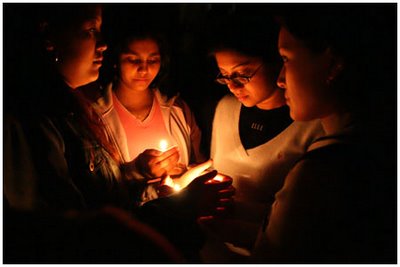 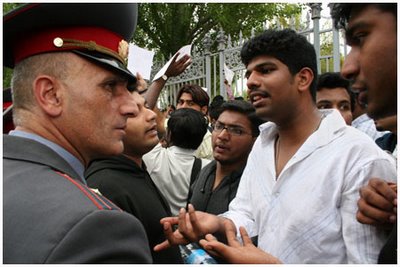 I have some updated information regarding the Indian student who died after falling from his dormitory window and Emergency services failed to show up in a timely manner--over 45 minutes later after the student's fall. It seems that Indian students have been facing continued discrimination by the Medical University Rector. Indian students were walking towards Republic Square, but students had already started gathering in front of the National Assembly building on Marshall Baghramian Avenue. Onnik wrote the following on his blog.

Apparently, an Indian student fell from a dormitory window and the pathetic Armenian emergency services took 45 minutes to arrive.

A few Indian students have been taken in for questioning by police and have not been heard from for the past six hours. Later, the new Rector of Yerevan’s Medical University literally gave them “the finger” when they complained. Indian students are now demanding justice and the removal of the Rector from her position.

Yesterday after finding out what happened when I heard the students marching down Aboyvan Street and calling out demands for justice, I told my coworkers what was going on. After I explained to one of them that discrimination against the students--which undoubtedly exists--may also be a motive for the protesting, he told me that may not necessarily be the case. He added that reverse discrimination occurs in Armenia--outsiders are given special treatment and citizens are secondary.

There is definitely truth in this, but because Indians are dark skinned and are clearly non-Armenian, although probably many speak better Armenian than most Armenians do with all the jargon and Russian words used in conversation, they are discriminiated against. Armenians are prejudice--the same thing happens in other communities. I have an Armenian friend in Boston who was frowned upon by family members, although not necessarily criticized, because he befriended an African American there. Armenians live in ghettos wherever they are in the world, apart from Moscow I believe as they are more spread out and face persecution of their own. They do not like to mingle very much, and I don't understand why. For many years I mostly had non-Armenian friends, and still now in Yerevan I gravitate to non-Armenians so as to get a different world perspective. "Vochinch" is grating on the nerves, especially to someone who has not grown up with that mentality circulating in society.

Photos of yesterday's protests and candlelight vigil held in memory of the student courtesy of Onnik Krikorian.
Email Post
Labels: Social and Cultural

Ethnocentrism threatens the cohesion of any society.

Christian Garbis said…
One Indian student, whose name is Nanyaar and has a blog called "The Instant Me", wrote a first hand account about the student who died and what happened while they were waiting for the paramedics to show up. He also wrote about his interrogations made by the police.

Christian Garbis said…
Armenia Liberty reports that the student who died, named Prashant Valecha, jumped out his dormitory window in an attempt to commit suicide, according to a statement made by the Medical University (YSMU) rector on Friday. More information can be read here.
Saturday, April 22, 2006

souvik said…
I'm planning to get admission into Yerevan State Medical University in 2006.I'm stunned to hear the suicide/murder case of that Indian Student.Can any one tell me whether taking admission in the same university is going to be of any use.......Please... THIS IS URGENT....Please try to gimme a suitable reply at the easliest.... THANKS.... THIS IS URGENT.....Souvik Kar
Thursday, May 11, 2006