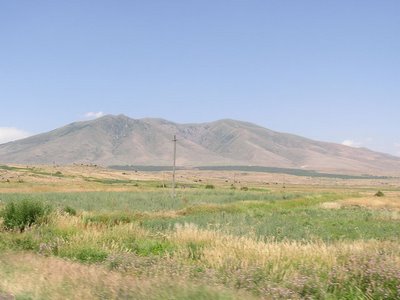 Last Saturday, May 20, a small group of us decided to climb . As an initial guide as to how to go about doing it we used a great book published by the Kanach Foundation called “Adventure Armenia: Hiking and Rock Climbing” for which I did some PR work in early 2005. One chapter is devoted to the mountain, and most importantly how to get to the base of it by car.

In order to get there you need to drive north through Ashtarak, located in the Aragatsotn region about a 10-minute drive north of Yerevan, then just outside of the town turn right, driving through Mughni village, which lies along the Ashtarak gorge. We drove through a couple more villages, all of which were surprisingly very green with little to no litter along the sides of the roads, with seemingly booming farming communities. The main irrigation channel that traveled through at least two of the villages was gushing with rapidly pouring water, white with foam, splashing along the cement sides and sometimes onto the road. There were orchards abound on both sides of the road there. In other words, the area seemed to be fairly more economically sustainable than other areas I have driven through, although this is merely an observation.

In any case, after about a 15-minute drive or so we arrived at the base of the mountain, then promptly found a place to have a picnic and thus store energy for the climb. is rather wide and is approximately 2300 meters high, with several peaks of varying height and two or three main summits. When looking towards the mountain from the perspective of the south or north, it appears as if someone is lying down along the length of it, the typical Armenian nose protruding from the left- or right-most end, depending on what side you are on. According to Armenian legend Ara was a hero or a king who had some affiliation with the mountain and apparently died on top of it, hence the name, then was resurrected by Queen Semiramis.

The book indicated that we should park the car alongside the main road that ran parallel to the mountain, then trek along a road, mainly used by utility vehicles, unevenly covered by loose rocks (which we jokingly referred to as Armenian asphalt), to enter the gorge at the mountain’s base and start walking up where the road ended. When we came upon one of the slopes, specifically on the left side, Nanor, our fellow climber who is visiting from , convinced us to climb the mountain there, head on, and my wife also agreed, although she carried about 10 kilos of provisions in a pack on her back. Our jovial, trustworthy cheerleader Hamlet said that he wasn’t afraid, so we started to climb. Although the slopes were at between 60-70 degree angles, in some areas even steeper, it wasn’t that bad going up. But just as soon as we reached the top of one peak, we realized there was another just above it, and climbed onward. We made it to the lower summit, just a few hundred meters below the northern most summit which serves as Ara’s nose. It took us about 90 minutes to get up on the lower summit, all the while having to contend with some small snakes and a pheasant leaping out of some bushes, with rather large swallows to guide us. The flora changed the higher we climbed—at one point the entire ground was covered by wild flowers, predominately tulips. Once we got up there we started to pile some loose stones in a pyramid shape like many do in this country once they arrive someplace high in elevation for whatever reason.

The girls took a nap up there while Hamlet and philosophized about various things while staring at the majestic, snow-covered . Mount Ararat is normally visible from where we were but it was hidden by haze as well as ’s smog, which has significantly worsened in the last year and a half. For some reason Mount Aragats does not receive the attention it deserves as a physical symbol of Armenia, eternally eclipsed by its big brother on the other side of the Arax River. It’s ironic since Mount Ararat technically does not belong to , rather it is an detachless icon to which the Armenian people identify themselves. Where we were perched all four summits of Aragats are visible, something that can only be observed along a 20 kilometer stretch or so along the road towards Lori. It was a spectacular view.

We decided to descend down along the rear face of the peak, which headed towards the foot of the canyon, instead of going down the way we came. It made sense—there did not appear to be any rocks to impede our way, and the ground seemed to have leveled off in a few places when looking down towards the base, which was actually hidden by other, lower peaks.

is completely covered by greenery. It is so green that it looks as if several crews with gigantic spray guns that shoot out chemical-laden grass seed used in the landscaping industry back in the States attacked it. There are lush, thick grasses everywhere under foot, and all sorts of critters furrowing through it. So it looked like smooth sailing down to the bottom; I figured it would take about a half hour to get down. How wrong I was.

When we were preparing to leave the house I asked my wife where my Timberland boots were, which have the waffle-pattern grooved soles great for nearly all road conditions. She took out my “All Terrain” running sneakers instead. When I reminded her that we were going to be climbing a mountain, she convinced me that I would be OK with the sneakers. How wrong she was in this case. Going down I must have fallen on my ass about 50 times, on a few occasions completely wiping out, all the while stumbling and tumbling down the slopes. The flat-soled sneakers gave me virtually zero traction, thus I was the tragic victim of gravity throughout my journey downhill. For the last quarter of the climb down, Ariga and I decided to try and take a rocky path, while the other two had miraculously already made their way down gliding across the grass, as I glimpsed them strutting along the rocky road below. Ariga, being an experienced mountain climber, but also with inadequate footwear, coached me down the trail which had been concealed by grass, then was suddenly revealed when we hit an arid, craggy area. At one point we were surprised to run across a lime green lizard, about eight inches long, sunbathing on a flat rock. It looked like the type of lizard that you see on a documentary program roaming through rainforests. If you look hard enough you’re bound to find all sorts of misfit wildlife in this country I would imagine. Supposedly bears reside somewhere on from what a co-worker, who is a hiking enthusiast, told me, but fortunately none crossed our path.

It took us over 90 minutes for the two of us to reach the bottom, as in between falls I managed to stop and observe my surroundings. Along the side of the opposite slope is a wide, lofty cliff, with several small holes scattered across it, in which the swallows reside from what I gather. There is also a strange forest with leafless, rather small, odd-looking trees that also houses birdlife. But for the most part, we were surrounded by lush greenery. One the way down despite my many spills I suffered only from very minor scrapes on my hands, which were nothing really. On the way back to the car however I managed to slip hard on the stone-covered path and twisted my knee. Hamlet served as my human crutch for half of the return walk, and thankfully the pain subsided late the following day, although my hamstrings are still aching.

All in all the climb was a wonderful, thrilling experience and I recommend it to anyone who loves hiking. I would recommend sticking to the directions that the Adventure Armenia book provides, which incidentally was available at the Armenia Information center on near the metro station, and I imagine still is.

On the way back we visited Mughnavank, a working church and former monastery complex in Mughni village. The monastery itself is beautiful as well as the gardens that surround it. The church, which is fairly new by Armenian standards having been rebuilt from the remains of an older one in 1669, has a very high dome compared to others I have visited. And to the left and right of the alter some frescos have been preserved, something that is rare to find here.

Incidentally, I should point out here for potential visitors to Armenia this summer that a new hostel has opened last autumn in Central Yerevan, just a stone’s throw from Mashdots Street and a five-minute walk to Opera Square. It’s called the Envoy Hostel and is where Nanor is staying. The entrance is on , which connects to Pushkin, on the west side of Mashdots, although the official address is . The cost per person per night is only 7000 or about $16. A room with a private shower and toilet accommodating two people costs 18,000 dram, or about $40. Prices include a complimentary breakfast. We were given a brief tour of the place and I can say that it is extremely clean and modern. In a city where the most affordable hotel room costs about $80 per night, this is a welcome, desperately needed alternative for travelers to on a tight budget. Hopefully, other investors will follow suit. Visit the hostel’s Web site by going to www.envoyhostel.com.

Anonymous said…
Great blog entry, mead me feel as if I was with you when you were making that fun trip to the Ara Mountain.

Ara said…
Jeff K. and I climbed Ara Lehr back in 1999 around April. It was quite an climb. We parked at some place that had a Church in the hillside and hiked up from there.

I was wearing combat boots on our climb and like you, the going up was easy, but the return down not only had me fall a couple of times on my butt, but also those sharp rocks were the cause of a few blisters and caused the sole of one of my boots to crack.

This is a hike everyone that is able to should take.

BTW, did your group notice Ara’s lower extremities while on the top of the mountain?
Sunday, May 28, 2006

Christian Garbis said…
When we climbed down the mountain we actually landed in the gorge, not far from the monastery, which was actually a tiny chapel wedged in a cave with a brick wall barricading the cave’s entrance. The next time we go I want to explore the gorge a bit more and climb the mountain at the end of the path there to get a different perspective. Apparently there are the ruins of an ancient free-standing monastery somewhere on the top of Mt. Ara, so there is definitely a lot more exploring to do.
Monday, May 29, 2006