A return to Ararat 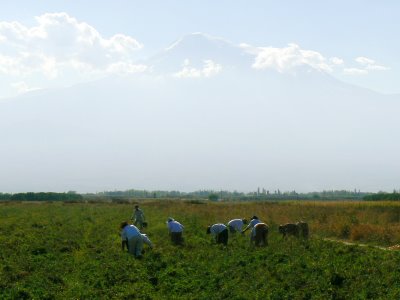 I spent the past weekend in the Ararat plains, where Sergey, my surrogate father in , owns about 10 hectares of land. The view is simply spectacular there, as his farm is located practically at the foot of . He is about one kilometer away from the official Armenian border, and the is only another two kilometers further. I’ve been going out there since 2002, when I lived in for about eight months.

Sergey is a mechanical engineer by training, working in that field until 1995, then decided to get into the farming business when corrupt government officials put the screws to him once too many times in an attempt to receive kickbacks from the profits he made. He had been running a state-owned factory which he leased to manufacture several metal-based goods, such as electric hotplates—which serves as a primary use for cooking in many households, primarily impoverished, that do not have gas or electric ovens—with folding legs for easy storage and an after market automotive part for the Lada “Zhiguli” used for effective interior heating.
He was inspired to enter the farming business when realizing that the land once cultivated yearly in his home village of Vosketap, located about 35 miles from Yerevan just beyond Khor Virap, had become a virtual desert, as local farmers gave up their occupation citing lack of financial resources to purchase seed as well as irrigation water or the simple unwillingness to work. From the onset Sergey studied the latest farming technologies immediately available in , then implemented them. He learned with much practice and patience which seed would yield the most crops without sacrificing quality and flavor. When the implementation of electricity for farming-related necessities was unheard of, he became a pioneer by drilling an artisan well for irrigation purposes and using a high-powered electric pump to extract the natural spring water from 50 meters below the earth’s surface. 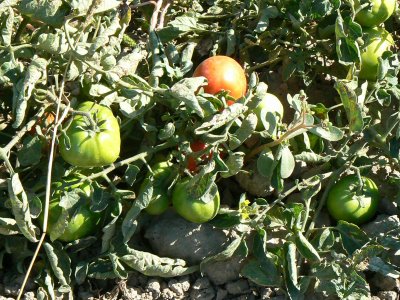 Most of the crops grown are tomatoes, cucumbers, peppers, and eggplant. He also grows corn, and when all the vegetables are picked he turns over the soil to plant wheat, which he’ll do in a few weeks. This year he had a late start with sowing the seed since the springtime brought more rains than expected. To spread the seed just before a coming rainstorm would spell disaster as it would all simply wash away. You need to wait a day or two after the rain for the soil to stiffen a bit so the seed can settle and take root. Sergey may sell the land as intent to purchase has already been expressed. 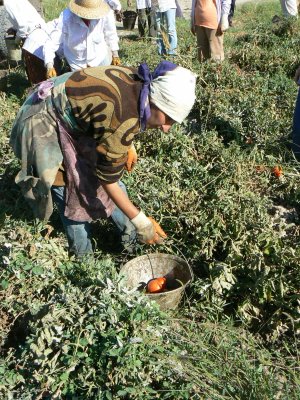 He more recently installed a trailer as his base of operations which has a security light operating every evening to ward off thieves as well as coyotes. During his first year there he planted dozens of fruit trees, namely apricot, walnut, and apple, for his own use. The following spring he discovered that each sapling had been cut by local village inhabitants, presumably to use as firewood.
Although his business has been fairly lucrative, he has not profited from the necessary demand to pay out bribes. Several times the local administrative authorities decided to cut his electricity, most recently this past spring, in an attempt to earn cash through demanding “penalty fees” to restore the line. Sergey’s usual response to such circumstances was frustration. But he’s decided to take another approach. He explained to me that this last time he went to the regional offices and entered the utilities director’s office while he was out, then laid down on the guest sofa in an act of depressive desperation. When the director arrived Sergey discussed the problem with him, and he believing Sergey’s sad state to be real, immediately called for the electricity to be restored. The Vosketap mayor has also harassed him in the past for kickbacks when Sergey was still leasing the government land before it was privatized only last year, but those problems were resolved when Sergey agreed to sublease two hectares to the mayor for his own profit. Recently he complained to me that his own in-law, the mayor of the neighboring village, also earns tributes from local, less fortunate farmers. 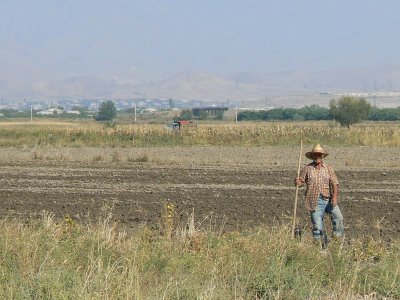 Each year I have known Sergey he has threatened to quit his business when the season ended, but then studiously prepares for a new harvest season in the spring. He spends the winters studying, solving Sudoku or crossword puzzles, and playing in backgammon tournaments held in his apartment building. His personality and general outlook on life are unique for middle aged men living in with whom I have come into contact. He cannot carry out a conversation without employing some display of wit, except when the time arrives to sell his crops. Although he can be pretty humorous, he has no tolerance for rhetoric or scamming from anyone, and each time we meet he has at least one story to tell about recently occurring absurd situations involving some aspect of his undertakings. 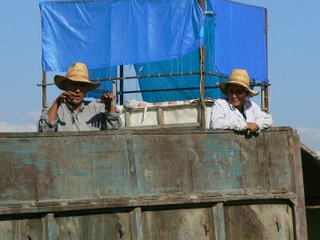 Most recently the agricultural ministry, having tested and determined his wheat to be of exceptionally high quality, asked that he donate it to residents of villages for their own farming purposes, which he agreed to do most willingly. But they decided to send the wheat to Ijevan, where there has traditionally been a lack of constant water availability. He knew this to be a case and stated that it would be better for the wheat to be distributed elsewhere where the flow of water was not a problem, but the authorities refused to listen to him, inquiring why he cared so much. Sergey then personally arranged for the transportation of the several tonnes worth of wheat seed to the town located in ’s northeastern region. The local official responsible for receiving the shipment did not believe that there was the promised amount of seed in the trucks, then doubted the quality of the seed, despite the fact that the Ministry of Agriculture had approved it. All of the seed was reweighed, and the said amount was exact. Sergey entered a war of words with the idiot before leaving, despite the guy’s attempts to make light of the situation. Sergey hates being accused of being a cheat—he must be one of the most honest, sincere people I have ever met, and I also become irritated when he tells me such things. 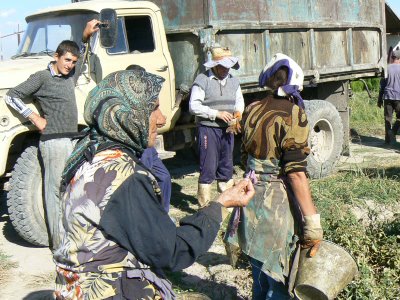 Despite all this, he perseveres. Even his employees complain about trivialities—that their half-hour coffee break, frequent water breaks, and hour-long lunch time are not enough for rest. I noticed that they generally do not work hard, the young guys especially slacking off a good part of the time. Sergey and especially his brother Gurgen who supervises the workers are particularly gracious, paying the best salaries anywhere in the area, around $165 per month which is something not to be necessarily scoffed at for people living in villages who generally have less expenses than those living in Yerevan, where goods and services are much more expensive. Most if not all the homes I have visited in Vosketap have fairly large gardens with healthy fruit trees as well as vegetable plants, not to mention chickens and even turkeys, so people are more self-sufficient. But some employees with whom he had a verbal agreement chose to spend a day elsewhere to harvest grapes for instance. They next day they bothered showing up on the farm, Sergey promptly fired them. This has happened dozens of times, and each time he can’t figure out why people set themselves up to be relieved from work. He’s now having trouble finding reliable people from nearby villages.
My wife wanted to go there to speak with the employees harvesting crops, as well as the managers, namely Sergey, his brother, and brother-in-law, about the maturity of the crops, when the ideal time is to sow seed, their personal experiences with farming, and so forth. She has interests in agricultural-related projects, having worked on several with her father, Ferdinand Grigoryan, before he died in late 2004. I spend our two days there photographing as well as shooting video. We also ate well, as my surrogate mother accompanied us out there.
I’ve been fortunate enough to know people who own a farm and who encourage me to visit as frequently as possible. Visiting the area is always a very pleasant experience. I’ve been meaning to spend a night there but that opportunity passed by this past summer when I was sent unexpectedly to the US on business for two months, but there’s always next year. Sergey already admitted to me that there’s a lot more work to do out there, whether he sells his land or not. 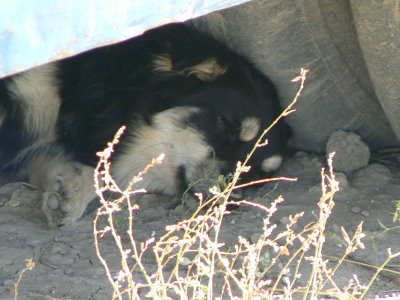 Ankakh_Hayastan said…
I have seen similar experience with village folk. When you hire them, and don't treat them like crap, they try to take advantage of you. I saw this a couple of times when my dad hired a guy to do some work. Although the terms were clear, and generous, in the end they wanted the diesel fuel to be paid for as well. The deal was that they would receive a lump sum for the services rendered.

Of course, since there is no custom of written contracts in Armenia, the terms are open for interpretation. Needless to say, the guy was never hired again.

And it is true - it is difficult to find honest people who want to earn a living. They will need money, agree to render services, and yet not show up later on claiming that they had some important business to take care of.

It can be very frustrating and I understand your friend being upset. The corrupt officials don't help either.
Tuesday, October 10, 2006