Destruction on a whim legalized 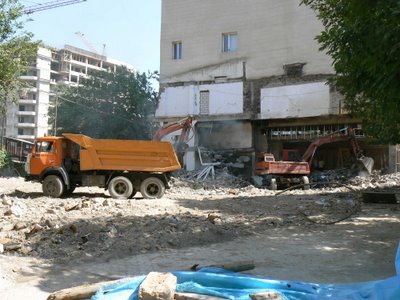 Apparently it was made official by the National Assembly of Armenia that the government does not care about the interests and well being of its citizens. The Armenian Parliament only yesterday passed a bill that would allow for any building, historic or otherwise, to be torn down whenever it deemed proper by a decree to oblige the “needs of the public and the state.” Protesters for a second time in about seven days were parked in front of the parliament building’s iron fencing on opposing the bill—I happened to drive by the area at the time and immediately understood what was going on.

This law overturns a decision made by the Constitutional Court of Armenia last April that stipulated all such demolitions made be illegal. The ruling was based on public outcry for the insufficient, rather humiliating sums of money given to families living in by the government, not to mention that several people were thrown out onto their asses from their own homes they occupied for decades. Although the going rate at that time averaged about $1,500 per square meter, many families were paid only a few thousand dollars for their properties, or a sliver of their homes’ actual worth. Apartments even on the fringes of sell for a minimum of $25,000.

Nothing was mentioned in the article that I read about how pro-government parties, particularly the coalition-member organizations, voted on the bill. But a majority of 70 members of the 131-seat parliament voted in favor of it.

It goes without saying that not only am I opposed to the decision, I am appalled that the government actually declared by passing a law that it will blatantly oppose the human rights of its citizens whenever and wherever it feels like it. I heard instances where people were virtually tossed into the street when they ignored calls for their eviction, just moments before a bulldozer smashed away at their homes—one woman supposedly died of a heart attack on the spot when she returned from shopping to see her apartment destroyed. Some protested against the measly amounts of compensation and in return did not receive a single dram. There is no way of telling where such people are today, some of whom do not have identification papers, but occasionally you can still see some lost souls wandering around Abovyan and Aram Streets, with blank looks on their faces mumbling to themselves. I have also heard rumors—which would not surprise me if they are true—of such people being thrown into vehicles, then whisked away to be dumped off at trash heaps on the outskirts of the city, where they “belong.” Armenians are careless and cruel towards one another as I have observed and even experienced personally. Whenever necessary they place their own interests first and foremost without turning a thought as to how their decisions may affect neighbors around them. As one example, the resident of the fifth floor of my apartment building has nearly completed the construction of his private elevator. The entrance way to the building was defaced so that he could accomplish this feat of selfishness. When the construction workers realized that not enough support was provided for the elevator frame to be free standing, they bolted it to the stairway wall, thus jeopardizing the structural integrity of the building. Not to mention that there are tons of cement blocks and slabs that now rest on the building’s roof so that he could add a second floor to his flat. The stairway has been coated with a thick layer of dust and chunks of plaster for over a year. Issues involving administrative carelessness happen everywhere in , particularly in the tourist-trap of as well as Vanadzor—’s third largest city—where problems with infrequent water supplies and garbage removal still go unheeded in both places.

I really don’t understand what’s going on in this country anymore. The troubling thing is that I am getting used to the fact that citizens’ interests repeatedly being cast aside are normal, acceptable occurrences. Indifference has become the method by which to govern and survive.

I have written an article and some blog entries about these problems earlier in the year—read them here and here and here.

On an unrelated but poignant note, an article published last Friday demonstrates political party apathy in activating the citizens they supposedly serve—read it here.

Ara said…
This is very sad. What is it that you think the Diaspora can do to be of help to correct this wrong?
Tuesday, November 28, 2006

Anonymous said…
I saw the disgustingly cruel, callous, greedy, and inhuman behavior first hand about three years ago at my relative's home in Yerevan's Nor Sepastia area. The small, simple, modest house was built in the early part of the last century. It was a sturdy old house full of charm and history. Greedy and arrogant neighbors, who somehow became wealthy overnight, decided that their house was in need of "remonding" and expansion. And so they "remodeled" and expanded onto my relative's front yard—covering with bricks the only light that came through his living room window—all the way to his back porch, a little place he and his family used every day. The family could say nothing about what the neighbor was doing because of threats. After all, the neighbor was wealthy now and with his new found wealth there was power, while my relative was merely a learned man. I remember Ashod's words in the early 1990s, " Mer zhoghovorduh lavun eh… Shad charcharvets… Verchabes lav beedee leenee bolorees hamar! Our people are good… They have suffered much… Finally it will be good for all of us!" With conviction and fervor in his voice, and a glimmer in his eyes, he often spoke those impassioned words of hope for a better future for all the people. But then, the years of persevering—patiently waiting and hoping and dreaming of a better life on his sacred soil became too much. His heart finally could take no more. Within a couple of months, the same fate befell his wife. They were not old.
Wednesday, November 29, 2006

Christian Garbis said…
Probably the sole effort the Armenian Diaspora can make at this point to address social problems in Armenia is to become politically active. The only organization that immediately comes to mind to tackle these issues is the pan-Armenian political party ARF-Dashnaktsutiun, which should not be a revelation. The Social Services/Social Security Minister is an ARF member, and the party holds 11 parliament seats as well as control over other key ministries, including the Ministry of Education and the Ministry of Agriculture. Furthermore, a deputy speaker of the National Assembly is also in the ARF ranks. As a member party of the pro-government coalition that supposedly possesses political strength, it should assumingly hold weight when it comes to defending the civil and human rights of Armenian citizens, and the ARF should have pushed for the bill to be suspended indefinitely for a vote. But it didn’t, despite being a political organization fostering socialist ideals. The ARF as an global political force with bases in most countries containing Armenians should pay close attention to what’s going on here in the socioeconomic realm, particularly when it comes to battling social inequality, but since the gap between ARF-Diaspora and ARF-Armenia is seemingly ever-widening, probably due to internal political clashes, and since diasporans are too distracted year round with Genocide recognition efforts, we can’t expect that to happen imminently.
Wednesday, November 29, 2006

Anonymous said…
In Armenia, as elsewhere, money translates into power and influence. Maybe the 13.7 million raised by the recent telethon should be channeled into human resources such as labor unions, citizens'rights groups and independent media outlets, rather than physical projects such as roadways, etc.

When the legitimate rights of average citizens are trampeled in such a brazen and unfettered fashion, solutions can only come from those experiencing such abuse and injustice.

That no political party or movement in Armenia feels the need to tap into this reservoir of discontent and to mould a true people's democracy is truly regrettable.

Thos individuals and groups in Armenia who are struggling against these outrages need our immediate moral, physical and financial support. There is too much at stake!!

The underbelly of Armenia is being turned inside out...And all we do is donate our meager $25 or $50 annually and believe that by some miracle all will turn out OK.
Thursday, November 30, 2006

Anonymous said…
Something similar is happening near my house in Arabkir.

There's a football field where the local children play. It's not much of a football field... just a big patch of bare dirt with goals at either end. Still, it's a place for the kids to go.

No more. A massive construction site has sprung up overnight, and half the football field has already been devoured.

(This is north of the Italia/Northern Ray neighborhood, just south of Kochar. Next to the railroad tracks.)

It's obviously private construction -- looks like someone is building another villa.

Of course the kids of Arabkir will be able to go to other parks, football fields and playgrounds. Because Arabkir has so many of those things, right?