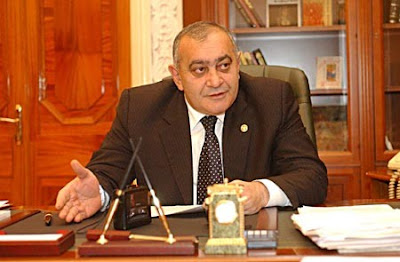 On March 25 Prime Minister Antranik Markarian passed away in his home at the age of 54. The cause of death was a heart attack, as reported by Channel 1Public Television. He was appointed to his position in 2000 by President Robert Kocharian, and was the longest serving Prime Minister since the inception of the Republic of Armenia.

In the 1970s he was one of a few dissidents who called for the establishment of an independent Armenian state free from Soviet rule and was subsequently jailed for his actions. He was a founding member of the Republican Party of Armenia in 1989, and he eventually rose to serve as the organization’s leader, up until his untimely death.

Prime Minister Markarian was perhaps best known characteristically for his mumbling and occasional incoherence whenever he spoke in front of the cameras, as his lips hardly seemed to move. He was also generally quiet when in the public eye. Although he did not really have the appearance that may be attributed to a died-in-the-wool statesman, he always had a dignified look about him, with an aura of professionalism that was not rivaled by many of his contemporaries. I would make jokes about this man with friends regarding where he should really be working or whatever, but now that he’s passed I must admit that he wasn’t a bad person. I have never heard any stories about his potentially perceived affluence and cunning as a businessman behind the scenes, and have not known anyone who has spoken negatively about him. According to his fellow party member and longtime friend President of the National Assembly Tigran Torosian, he never stalled to talk to ordinary people, whether they were morning street sweepers or old men trying to find a way to make a living in their villages. He always appeared to be a gentle, peaceful man who would never deliberately harm anyone. On the contrary, he was known to do whatever he could to help those that petitioned him. Critics have scrutinized his policies and failures to tackle one issue or another, but that is to be expected of any politician.

I cannot guess who will be chosen to serve in his place, not that it matters very much right now. Perhaps some ministers will be reshuffled in the process. But I think it is a great shame that a second Prime Minister died while in office in less than a 10-year time span. I think he was a good man who had much important work left undone. I don’t know what his legacy will be, but I would venture to guess it is having dutifully served his country to the best of his abilities, with honor and valor. 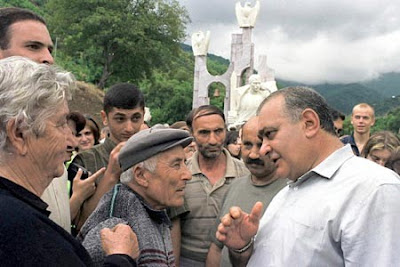 Ara said…
Those are some very nice words about Markaryan that if you ask me are not at all fitting.

The guy was a bastard who put on a good show for those that didn't have the time to ask around about him and what he had done for the time he was in office.

If you read my posting from January when I visited Kashatagh, you will have learned that his wife's cousin was the regional minister and the only reason why he was not kicked out in May of 2006 was that Markaryan himself showed up to tell the people as long as he is PM than his wife's cousin will remain regional minister. Markaryan played a big roll in depopulating Kashatagh.

The only credit I will give him is what I wrote after his death (see: http://aramanoogian.blogspot.com/2007/03/man-of-his-word.html) and that is that he is a man of his word. When his wife's cousin was removed from his post, Markaryan made good on what he said in May of 2006 and resigned from being PM.

All I can say is that may Markaryan suffer in his afterlife as those who lived in hell because of him during his time in office in did.

Armenia did not grow during his time in office, it shrunk, as we saw in Kashatagh.

Will it get better without him? I would guess not with that bastard Sarkissyan. And as you well know, thanks to Sarkissyan, many more people have suffered and died so he can be in power.
Wednesday, April 11, 2007