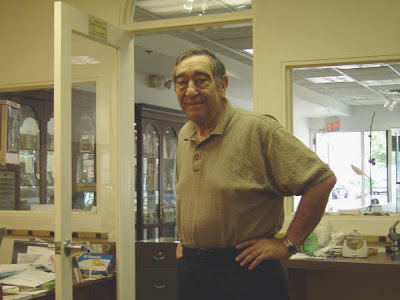 I just received some photos taken of my father by my brother, Sevan. Khosroff returned home a few months ago and is getting stronger by the day mentally as well as physically. When I speak to him on the phone it seems as if he had not been ill at all; his wit and knowledge are fully intact, although he cannot comprehend what has happened to him, probably because he is in denial. Even his doctors are amazed that he has come this far and will continue to improve, as they initially insisted he would never survive the shock and damage resulting from my father's cardiac arrest.
But he suffered a minor setback the other night when apparently he had difficulty breathing. Some water had begun to collect around his heart and thus it was failing to pump at full capacity. The same doctor that initially treated him seven months ago, who cannot believe how far my father has come, seems to think that the condition may be attributed to too much salt in the food he eats, so he will have to adjust his diet to cut down his sodium intake considerably.  My mother has naturally been spoiling him, letting him eat whatever he wants no matter how outrageous, but I would probably have done the same thing considering all he has gone through as well as she.
Photo: Khosroff Adanalian, Kosroff's Jewelry, Lexington, Massachusetts, courtesy Sevan Adanalian
Email Post

Ara said…
Great to hear about his return. For what he has pulled off over the last seven months, this little set-back I'm sure he will overcome without any problems. Good health to him, your mom and your family.
Sunday, July 22, 2007