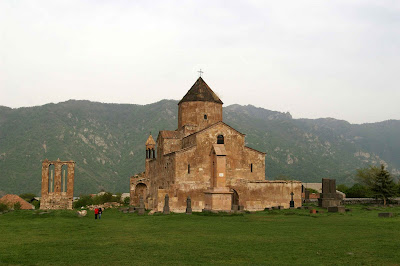 On Saturday I accompanied Julie on the final leg of her brief tour of northern Armenia. We traveled to Lori specifically, in the magical area surrounding the mining town of Alaverdi. There are several notable monasteries in that vicinity, and we travelled to three of them: Haghpat, Sanahin and Odzun. The first two were built around the 10th century, although construction continued at Haghpat for another 300 years or so. 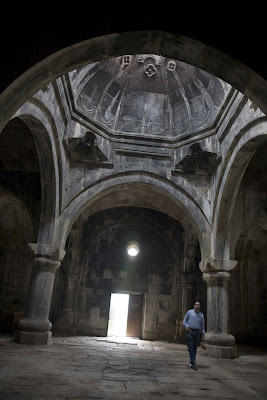 Haghpat is known of course as being the monastery where troubadour Sayat Nova served as a devout priest a couple hundred years ago. 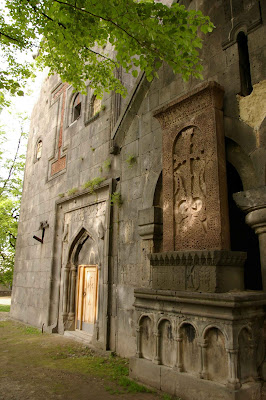 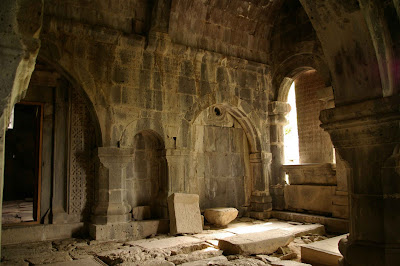 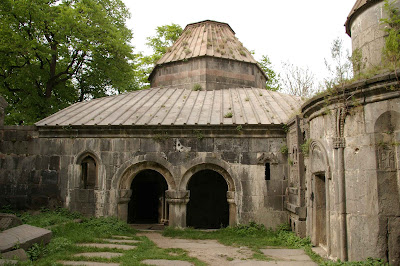 The one fact that I never forgot about Sanahin is that the complex was constructed by Queen Khosrovanush in dedication to her sons. I have contemplated calling my daughter Khosrovanush, assuming I have one someday, in honor of my father Khosroff, not ignoring of course that it is a fantastic name. 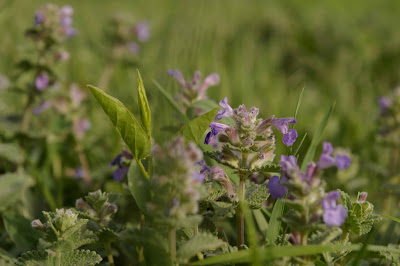 Odzun dates as far back as the fourth century but the structure collapsed after an earthquake hit the region not very long after completion. The church was rebuilt nearly in its entirety in the sixth century on the same foundation as its predecessor. Several salvageable relief stones from the first church were used in the reconstruction according to what the priest, who is a dynamic, passionate young man, explained to me. He also told me that an important religious figure (I am terrible with names) was believed to be buried in a crypt below the altar of the church, along with a segment of the shroud of Jesus. Apparently the government is going to sponsor an excavation of the site, which does not seem very appealing to me personally as I have noticed first hand in my travels that municipal workers can be fairly sloppy when undertaking such projects.

At Odzun there were notable differences in the upkeep since my attendance last year. For one thing the grounds surrounding the church were mowed—something I noticed for the first time having visited the place five previous occasions. I remember seeing a cow or two wandering around the premises the first time I visited there three years ago. Also, a staircase leading to an area above the entrance to the church, which served as a balcony but for what specific purpose remains unclear to me, was just reconstructed from wood according to what is thought to be a very close replica of the original design. The wood was simply stained to maintain authenticity, no paint applied. It is a fully operational church now, the priest having been appointed there in 2006. 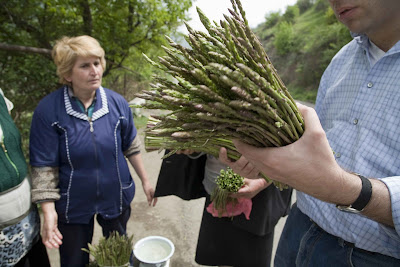 This time of year is asparagus season in Armenia, most of which can be found growing wild in Lori. It only lasts for a couple of weeks. Residents of villages climb up to the lofty, rocky points where they live to access the asparagus, which they snip at the base of the stem, leaving the roots intact so that the plants sprout again the following year. I love asparagus, and I was lucky enough to find some people selling it alongside the main road on the way to Alaverdi. They sold me a huge bunch for 2000 dram, or about $7.00—the moment was proudly captured by Julie in the photo above. I must have purchased close to 2 kilograms worth and I have already eaten most of it, in Julie’s company of course. Incidentally, she moves onwards on Tuesday, and her project documenting genocide memorial sites around the world continues. 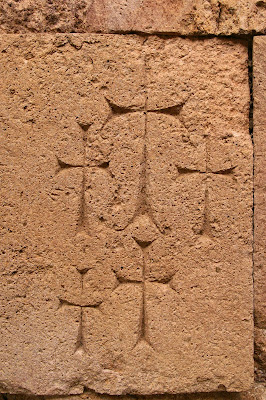 Second and seventh photos by Julie Dermansky.
Other photos by Christian Garbis.

The Historian said…
I am presuming the religious figure you were told is buried at Odzun is Catholicos Hovhannes of Odzun? After my trip to Armenia I set out to study the Catholicoi with the (extremely limited) information I could find through the internet. I'm sure old books would contain more information but I don't have access to any nor is my Armenian that great to read them anyway. Hovhannes of Odzun has a very interesting story in which he went to meet the Caliph, whom he had allied with against the oppressive Byzantines (interesting role-reversal to what the typical Armenian today would expect, the Catholicos putting Armenia under Arab Muslim jurisdiction to fend off the oppressive Christians!) At this meeting the Catholicos was arrayed with marvelous vestments and powered his beard with gold dust. The Caliph commented to him something like I thought Christians were supposed to be humble, at which point the Catholicos revealed the hair vest (you know, those things the hermits used to wear to scratch their bodies and cause great discomfort) he wore underneath.
I was trying to find the burial places of all the Catholicoi throughout history, though didn't come up with very many based on my limited research ability. The websites did speculate that Hovhannes of Odzun is buried at Odzun and one page had a picture of the alleged tomb- though I do believe whether it is actually his or not is up for debate- probably why they are doing the archealogical work. I hope there will be someone watching the workers, this is the kind of thing which needs a careful team of professionals as you alluded, most likely not the people who actually will be doing it. Sounds like a fantastic and interesting historical character though, I'd love to be involved with that.
Monday, April 28, 2008