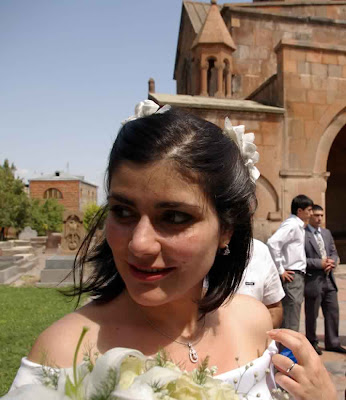 Our wedding was a huge success. Around 65 people turned out, comprising mostly of Anushig’s relatives. Regrettably no one from my side of the family could make it to the wedding this time around. 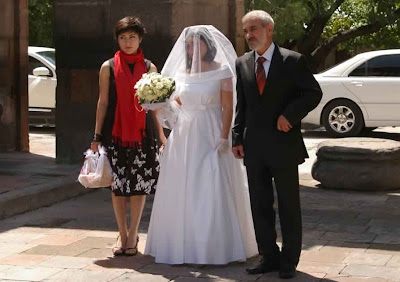 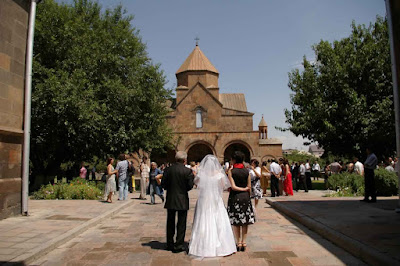 Sergey Minasian stood in as my father, while his wife Nelli, my surrogate mother, was unfortunately in the hospital. Other friends who turned out included Shari Melkonian from Boston, who now lives here and works as the country director for the Armenian Volunteer Corps, and Ani Tchaghlasian along with her husband Hagop. Several friends from my workplace were also in attendance. My “kavor” or best man was Loris Lalayan, whom I’ve known since 2002 when we were employed at a software company here. He’s a fantastic, warm guy who I value very highly as a true, dedicated friend. 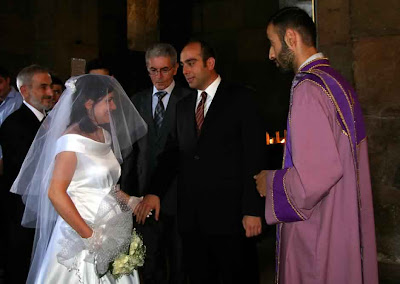 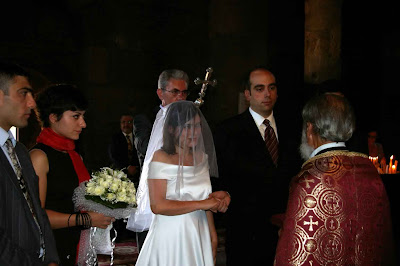 The church ceremony at St. Gayane started about 20 minutes late. At least two weddings were held before ours, but at the time I ran into a slight panic thinking that someone else had taken our place. Then it dawned on me that the schedule was set at Armenian time, so we roamed the church’s surroundings in the meantime, inspecting the graveyard and trees. The “tamada” or master of ceremonies showed some of us the grave of Khent, the real-life protagonist of Raffi’s novel of the same name. 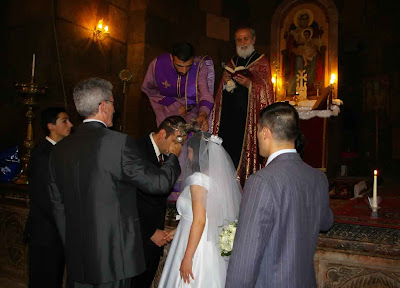 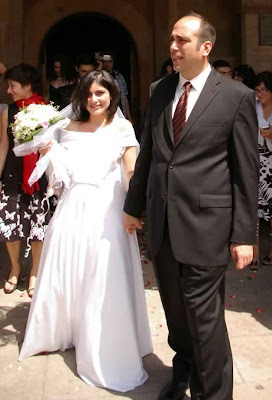 Our reception was held at ARMA Hotel and Restaurant, which is located in Nork-Marash. We chose to hold the party on the patio under the green canopy they have in place there. The food, ambience and service were all fabulous. I must have drunk at least three liters of the five jugs of wine that I personally fetched from Haigaz’s wine cellar down in Areni about 10 days ago. I purchased 30 liters, all of which was consumed by the guests along with the Russian “Green Mark” vodka. The dry wine was superb, aged for three years. Despite forecasts calling for a 60 percent chance of rain the outlook was rather sunny, although by evening a thick mass of foreboding clouds moved in from the south. But no rainout, thankfully. Had there been rain it would have been a disaster, a complete washout since the canopy has worn a bit thin. 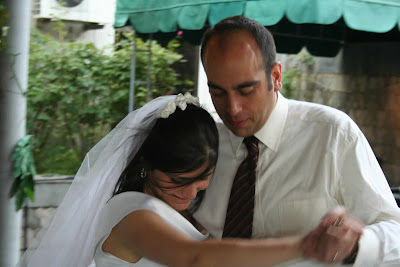 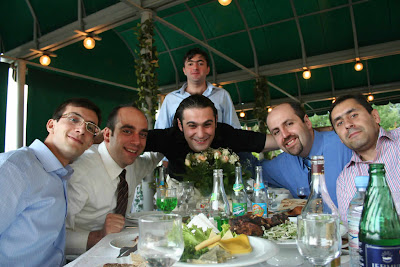 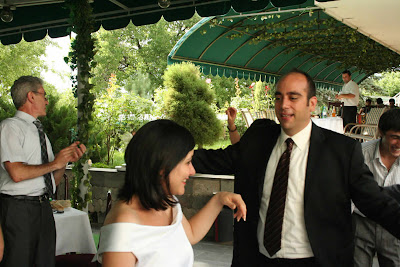 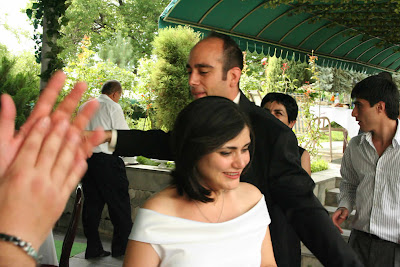 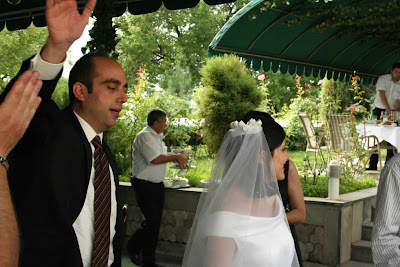 The band assembled by David Minasian performed traditional Armenian music with depth and feeling, and they managed to energize the guests quite nicely. Everyone I spoke to was very pleased. I thought the band was amazing personally. They performed all the popular folk songs that I grew up listening by sheer chance. Among the extremely talented musicians was Vardan Grigoryan of the Armenian Navy Band, who played duduk, clarinet and I think zurna at one point—can’t remember all that well since I was pretty drunk. Actually my memory of most of the night is fuzzy, or maybe hazy is a better word. Too much revelry does that to you I suppose.

The photos posted here taken at church are by Lilit Manucharyan, while those at the reception were shot by Soseh Hovsepian, who is a friend from work. Others pictures that were taken by a semi-professional photographer at church we will not see for two weeks, which is odd. Virtually zero portrait photos exist of me and Anush since no one with a camera bothered to take them for some bizarre reason, so we’ll most likely get dressed up this weekend to have some shot by my good friend Karen Minasian (Sergey’s son), who is a professional photographer.

Anyway, I am thankful to all the guests who attended the wedding to share this special, memorable day with us. Despite a hangover that lingered for about two days it was certainly one of the best days of my life. The only people missing to share in our joy were my parents, Khosroff and Linda, and their presence was missed by many, including Sergey who knows them personally and my mother-in-law Klava, who is naturally very eager to meet them. Nevertheless, they were with us in spirit.

I wish the party didn’t end so soon. I’m looking for an excuse to have another one.

Chrissy said…
Congratulations, my Chrissy! I'm sorry I couldn't be there, but you were in my thoughts!
Tuesday, August 04, 2009

Vagabonde said…
Thanks for inviting us to be at your wedding, via your very nice pictures. It does look like it was a sunny day. Your bride is very pretty and her dress was lovely. I am sending you many wishes from Georgia (USA this is).
Wednesday, August 05, 2009

Jason Sohigian said…
congratulations to you both - look forward to seeing you again soon!
Wednesday, August 05, 2009

Anonymous said…
Congratulations!
I would never think that I can spend so much time reading a blog. You are a good writer.

Anonymous said…
Congradulations to you buddy. Nice pictures. Post some more when you get them from semi proffesional photographer. I hope to see you in May or sooner.

Ara said…
Congratulations!!! Sorry we could not be there with you, but it looks like you still had a great time without us. May you have many happy years together, growing old on the same pillow.
Friday, August 28, 2009

julie dermansky said…
guess you have solved your love problems! well done. happy trails to you both!
Wednesday, September 02, 2009