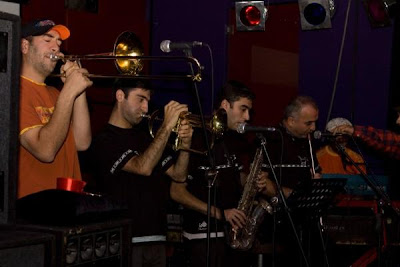 Last night I took some friends who just arrived from the States to Stop Club, which is located on the corner of Tumanyan and Moscovyan Streets, to see the "jazz-fusion" band Katuner, lead by Vahagn Hayrapedyan. It was their first time seeing the band, and I can't even count the number of times that I've heard them perform over the last few years. They always put on a fantastic show.
The term "jazz-fusion" has traditionally been used to describe any music that blends jazz with motifs of rock music. But in all honestly, I don't feel comfortable placing that label on Katuner's music because I think it's unclassifiable. Miles Davis was the first to mesh the two genres in the late sixties by incorporating electric guitars, pianos and basses into his arrangements. Katuner on the other hand uses mainly acoustic instruments, with an electric bass and a battery of synthesizers that surround Hayrapedyan used to compliment them. Last night, however, a young guitarist from the Boston area sat in with the band.
Influences of Monk, Miles and Mingus are recognized in the compositions by people who know the music of these legends, with subtle hints of Armenian harmonies weaved in to the songs' melodies. As far as I am aware, all compositions performed are originals written by Hayrapedyan, and each of them is phenomenal in intensity and drive to lure in the listener into his world. 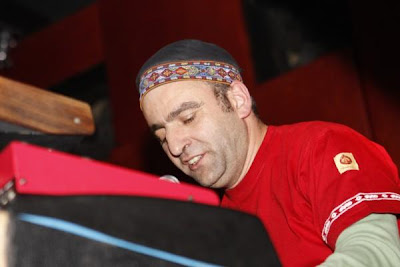 Katuner seems to be his main artistic outlet which Hayrapedyan uses to best convey the intent and meaning of his work as a premier musician in Armenia. As I've noted on this blog in previous posts, Hayrapedyan is undoubtedly the best jazz piano player in Yerevan and he regularly plays around town at places like Poplovok with a bassist and drummer performing mainly jazz standards. He also plays with the Armenian Navy Band.
Katuner incorporates mainly instruments that are typically associated with jazz--trombone, trumpet, saxophone. Familar faces in the band are trumpeter Tigran Suchian, bassist Artyom Manukyan and David Minasian on trombone, all of whom perform with Nooz. Norayr Kartashyan plays various wind instruments, including soprano saxophone, zurna and another long, thin metal instrument that resembles a flute in sound but air is blown to the side of the mouthpiece, not directly into the instrument. I didn't have a chance to ask him what it was, unfortuantely. Hayrapedyan plays various keyboard instruments, on which he manages to create uniquely weird, cosmic sounds that always tend to make me smile. In all, eight musicians managed to cram into a tight space on the lower level of the club where the "stage" is found. I don't know how they managed but it didn't affect their playing one iota.
The band just released a new CD called "Red Sun" and played three shows at Club 12 to celebrate the occasion. You should be able to find it in music shops in downtown Yerevan, but as far as I can tell it's not yet available for purchase online.
More about Katuner can be read on their MySpace page.
Photos of Katuner and Vahagn Hayrapedyan courtesy of Katuner's Albums.
Email Post
Labels: Music