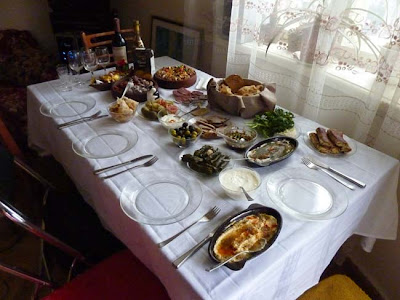 This post is especially for those of you who appreciate well-prepared, fine foods of various cultures and tastes that commingle in a mélange of culinary bliss.

This year in harmony with the tradition of the Armenian New Year's feast, we decided to go all out and outdo ourselves in previous years, preparing dishes we haven't served to guests before while providing the usual standard, comfort food.

First came the salads and cold dishes. We made some hummus according to the classic method of preparation, soaking the chick peas overnight then cooking them for about three hours. After that we added them to the food processor with a few teaspoons of salt, crushed garlic and tahini. Ten minutes of smoothing and taste testing later, we declared it done and set it aside. I also made lebne, which is strained yoghurt topped with finely crushed mint, paprika (or cayenne pepper) and drizzled with olive oil. I eat this almost every day with lunch or dinner or even a late-night snack. 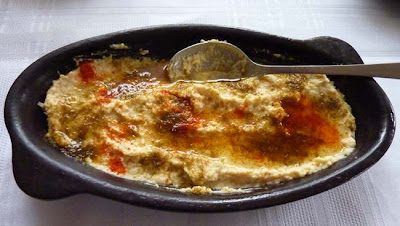 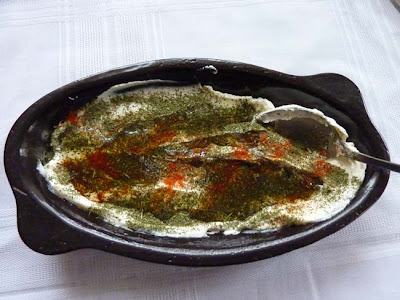 We also served sujukh, a type of sausage made from ground beef containing a fair amount of grizzle, various spices, and garlic. That's accompanied by basturma, a pressed, cured beef tenderloin coated with chaman, which is essentially a red curry that varies in hue, the actual blend of spices and level of hotness by manufacturer. I prefer the store-bought made by a firm called Delicates, since the beef selected is always high quality, not to mention very tender, and the intricate flavor of the sujukh tastes just like my grandmother's. 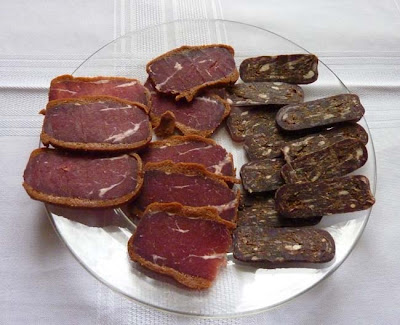 Then there was the olive salad, very similar in color and taste to the one my mother makes that she learned from my grandmother. We used a combination of syrian and spanish green olives, removing the pits, then slicing them. Next we diced a small red onion--although scallions or a white onion is preferred--for a color contrast, and also chopped parsley and also cilantro, since my wife puts it in just about everything that calls for greens. Add some lemon juice, olive oil and the key ingredient, a generous amount of pomegranate syrup, and you're good to go. 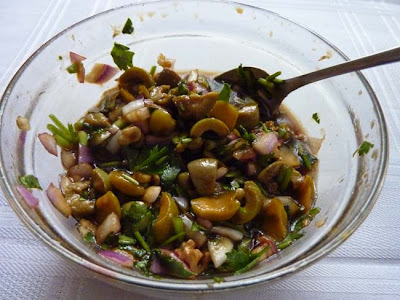 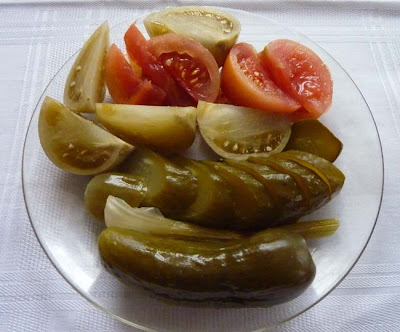 We also sliced up some of my mother-in-law's pickled cucumbers and tomatoes. Anush made some great pickled cauliflower and carrots that haven't yet made it to the table for some reason.

Next were the main dishes that you see on just about any table--the roast fresh ham--first time for us--that had been soaked overnight in salt water, then smeared with a sauce of mayonnaise and spicy mustard before being baked in the oven for two and a half hours. She also made slits on the meat and inserted prunes and garlic cloves beforehand to enhance the flavor and also tone down the gaminess in the process. 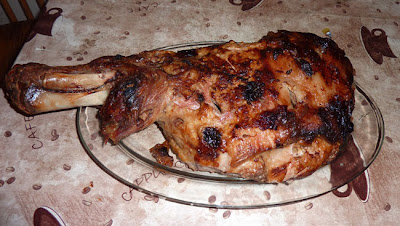 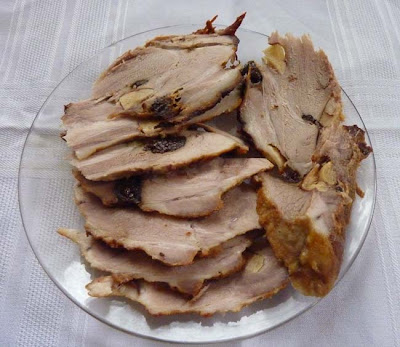 Then there was the sarma (a.k.a., tupov dolma), which of course is stuffed grape leaves with a mixture of lean ground beef, rice (we used fragrant thai) and spices, and something known as patsus dolma, which is a mixture of beans and other stuff wrapped in pickled cabbage leaves and then braised, a favorite of Armenian vegetarians. I have to admit that I'm not a huge fan, but many people love the stuff. 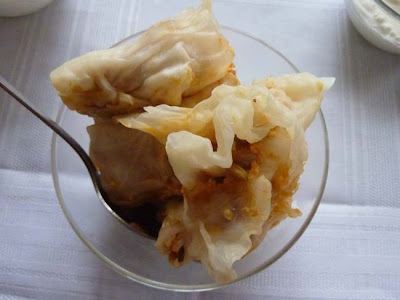 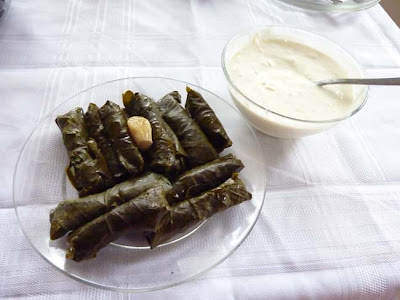 My wife also made another holiday favorite -- rolled-up crepes, known as blinchik, filled with sauteed ground beef, diced egg and spices, then lightly browned and served with sour cream. Another first-time experiment that turned out quite well. 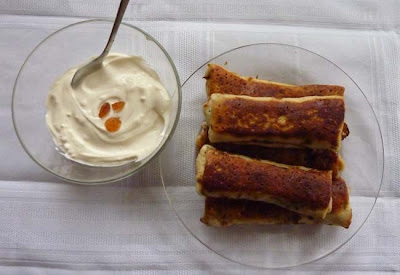 For dessert we put out the usual stuff--dried fruits including sour red plums, black figs and persimmons, something I have only seen in Armenia. (The dried apricots never made it to the table since I devoured them all just before the new year). There's also fresh fruit, assorted chocolates and a trail mix we concocted of cashews, almonds, walnut halves, white raisins, hazelnuts and M&Ms. We also had the sweet sujukh, which is a long string of walnuts that has been dipped in a thick, sticky smooth sauce made from grapes. 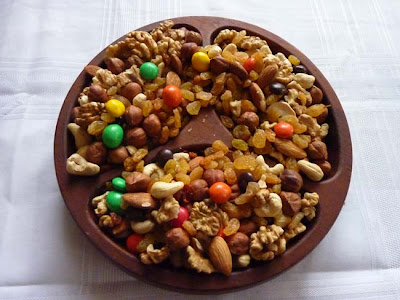 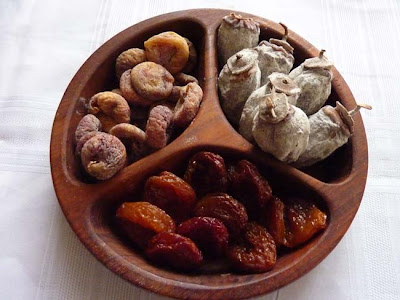 This is the time of year when Armenians are most generous, kind and hospitable. It's a time for sharing and wishing each other well for the coming year. For some there's a constant flow of friends and family coming and going to make toasts and have a small bite to eat. Those who can afford it always manage to set a lavish table, even in competition with their neighbors. Some people even take out small loans to make sure they have enough vittles to feed their guests. In the days before the new year the sidewalks were lined with independent vendors and store employees selling produce, fresh farm-raised fish, dried fruits, juice and soda, whatever needed.

The party lasts at least through Armenian Christmas on January 6, sometimes until January 13 which is the old New Year, depending on how much revelry you prefer. These days are always full of merriment and surprise, a time that arguably can't be shared the same way anywhere else, certainly not in the US where you have two nights and days separated a week apart to celebrate. Our neighbor to the north Georgia also doesn't go all-out for the winter holidays; they're already back to work. Getting around Yerevan these days by car is easier since most people stay home and drink, eat and sleep all day long.

For me at least it's the best time of year to be in Armenia. I also tend to be the most creative, which is definitely something to be thankful for.
Email Post
Labels: Food and Drink Social and Cultural Thoughts and Musings

Vagabonde said…
Oh my goodness, this looks so good! So delicious – it makes me quite hungry. I have not heard, seen or eaten sujukh and basturma since I left France. My father used to bring it home all the time. There was an Armenian grocery in Paris near his club, the Diamond Dealer Club of Paris. So it has been decades since I ate this. Here in Atlanta I would not know where to buy anything like that. My last good Armenian meal was at my cousins in Heliopolis, Egypt, on Christmas Day a 6 January a few years ago. That makes me think about writing a post about Christmas being on the 6th since everyone here thinks the season is over. I’ll mention your blog if anyone wishes to see what Armenian cooking is like – how wonderful it is. I wish you and Anush a great 2011 with much happiness and joy.
Tuesday, January 04, 2011

Christian Garbis said…
Hi Vagabonde, great to hear from you. We likewise wish you and your family a wonderful year filled with much happiness and adventure. We would be more than pleased if you decide to celebrate the 2012 New Year's holiday with us in Yerevan.
Tuesday, January 04, 2011

Anonymous said…
Allllllllllmost makes me want to head back to Armenia, but..... nah, I'm never coming back. Not until half the ministers are thrown out, major structural changes occur, and the people start being a little more 'laid back' like their cooler Anatolian brethren.

Happy New Year to you and Anush. May the noviy god bring you happiness and a pair of rusty brass knuckles with which to knock out the punk neighbor with the attitude problem.

Ankakh_Hayastan said…
[...]The party lasts at least through Armenian Christmas on January 6, sometimes until January 13 which is the old New Year, depending on how much revelry you prefer.[...]

This is the capitalist talking but I wonder how much productivity is lost. 2 weeks out of 52 is 4%. I wonder if this prolonged partying reduces the GDP by 3-4%.
Wednesday, January 05, 2011

Rosaria Williams said…
I came from Vagabonde, partaking of your banquet for the eyes. Lovely.
Wednesday, January 05, 2011

Anonymous said…
How amazing that a country that produces pravtically nothing can afford to go on "holiday" for two weeks. Then again, I guess there isn't much damage done. Also, people shopping for all the food and drink to decorate their tables with actually gives a year end's boost to the economy.
Saturday, January 08, 2011

Anonymous said…
I stick to western Armenian fare for the holidays. Much more palatable and a great conversation piece for Armenians who only know "basoots dolma and khozi bood"
Saturday, January 08, 2011

Anonymous said…
Talk about the Gumi market. After a long search for pine nuts, nobody seemed to know what I was talking about, I finally found them there. The guy told me to wait and went off to bring a small bag back from his secret stash. Used them to make yalanchi sarma (just rice). We also looked for a leg of lamb to roast but lo and behold there was no lamb in Armenia to be found at any price. Wound up roasting a frozen US turkey, which didn't come out bad at all. Then too, I also found gargood for anoushabour at Gumi as well. No one in Armenia seems to know the dish which is traditional fare at western Armenian X-Mas tables. Happily, we can all make it through another year here in the homeland before another round of expensive holiday fare.
Saturday, January 08, 2011

Anonymous said…
Just to let you know. There seems to be a problem with the Footprints blog on Hetq. Can't leave a comment there.
Saturday, January 08, 2011

Christian Garbis said…
I wonder who exactly found the pine nuts for you there, can you identify the approximate location in the Gumi market more or less? Also have we met before? You forgot to sign your comment...
Saturday, January 08, 2011

Christian Garbis said…
Thanks for letting me know about the comments page on Footprints. There have been some technical problems with the host web server, perhaps this issue is an aftereffect. Hope to resolve it soon.

Anonymous said…
Ahh..the pine nuts. What a futile search through Yerevan. Haleb store had them but were not quality and expensive. On the far side of the Gumi market. Inside, then make a left. There's a few stalls there selling spices, etc. Forget the man's name but ask for "sonbahar". Also cooked up some "chorek" and "kourabia", yummy stuff.
Saturday, January 08, 2011

Christian Garbis said…
You should be able to leave comments on Footprints now. Can you try again please?