A Lesson in Broken Fuel Caps

One of the quirky things about living in Armenia is the spontaneity of adventure. My daily routine if you could call it that is often disrupted by needing to run unexpected errands, like shopping for wet napkins for babies or having to suffer the grueling process of paying my annual automobile taxes (which I need to do asap). Rarely I find myself having to roll my Niva down to the auto repair garage that I frequent, located behind the circus (where a braying donkey can always be heard).

This morning yet another unexpected challenge awaited me – just over 30 liters of premium gasoline that I purchased from Gagik in Aresh yesterday afternoon were siphoned from my gas tank. The thieves were able to pry off the locking device in place that essentially seals the tank spout, without causing much damage as it turned out (read on).

There are two kinds of devices available to lock the spout of a Lada that doesn't have one already built-in from the factory. There's one that screws onto the spout replacing the standard fuel cap that locks on with a key. These vary in quality and are relatively easy to tamper with, as my experience has proven. The one shown below demonstrates the locking fuel cap's design, but the image is not meant to represent the models of those I have used in the past. 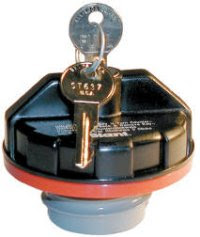 The other is a Russian-made cylindrical device made of hard plastic that you insert into the spout about three-fourths of an inch down, which with the turn of a key fastens to a nub found on the spout pipe – that's what I've been using for about two years now. The trouble with this lock is that it's often tricky to install; it can take some fiddling to get the thing to fasten in place. I've found that it's best to hold it down with my left index finger while turning the key with my right hand, which can be difficult since it's on the key chain and the other keys get in the way when I try to lock it. Also it doesn't seal hermetically, meaning that if the gas cap is not affixed tightly enough gasoline can spill out when making hairpin turns with a mostly full tank.

Somehow the petrol bandits were able to unhinge the latch by breaking off a piece of the bottom of the lock (represented in green in the diagram shown below). The top of the lock where the key is inserted appears unblemished, and there was no immediate way of knowing that it had been fiddled with until I inspected it more closely. Whoever did it was obviously very clever and must have had previous experience in deviously removing these things.

So this morning the search was on for a replacement, even though it still seemed to be working properly but I wasn't all too sure. The cracked corner just below the latch troubled me and I figured it was best to buy a new one. The bandits were sweet enough to leave about a half-liter of gasoline in the tank so I could make it to the gas station down the road. Then I wandered into the Lada auto parts store just around the corner from the station on Nardos Street where I had originally purchased the lock, only to find that they were all out. Apparently the locks are no longer being produced, which is quite strange given the umpteen thousands of Ladas that must be on the road in the former Soviet Union, not to mention all the Nivas owned by fanatics around the world. I visited about five parts stores anyway, most of them being on Kochar Street in the Arabkir district, not far from where I work. All were out of stock. But the owner of the last store I went to told me after inspecting the lock that it was indeed functional, and it was still far better than any of the locking caps on the market, so I'm sticking with it for now.

Nevertheless it seems I'll be taking more frequent trips to Aresh to fill only a half-tank of gasoline at a time. With prices currently set at 480 dram ($1.15) per liter, I can't afford to fill up the tank only to get duped by the gasoline robbers again.
Email Post
Labels: Personal Experiences

Arshakadelic said…
Sorry it happened to you. How many liters is your gas tank? 480 dram for premium sounds like a bargain compared to the $4.29 per gallon for 87 octave here in the states.
Wednesday, May 18, 2011

Ara said…
I remember my Niva would always get hit when parked in Yerevan. And in my case, they had not broken the cap, but from under the car where the hose attaches to the fuel-pump, they would take the hose off and drain the tank. Once I figured it out, I but a shut-off valve inside my car between the tank and hose that led to the fuel pump.