Last week I decided to purchase a new set of tires for my Niva. I was no longer confident that the ones I had were able to handle the road properly, especially with my two year old in the rear strapped in his booster seat.

So what’s the problem? It’s a Niva, the world famous four-by-four that can travel through swamps and cornfields all day long before coolly cruising down city streets in the evening.  It should hold it’s own no matter what, right? Look at them all in Yerevan, for crying out loud. There’s a snow white Niva with black-tinted windows and giant alloy wheels on almost every corner. 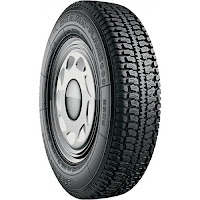 Problem is most of them are outfitted with the wrong tires. I would say 90 percent of the Nivas on the road in Armenia use the KAMA Flame 205/70R16 shown to the right, most with aftermarket fancy mag wheels. This tire is great for the streets and it handles fine in the snow. My first Niva had them on the factory rims. But they can’t handle turns very well, with lots of pulling especially when making a hard left, as if the car was just about to tip over. I thought this was a normal thing, that Nivas are supposed to handle that way.

The wheels on my car made the tires jet out from under the fender, which means they were separated farther apart from each other. Plus the tires themselves are wide at 205 mm, much wider than they should be for a Niva to perform properly, with too much friction and thus higher rolling resistance, things I only just learned about in my research. 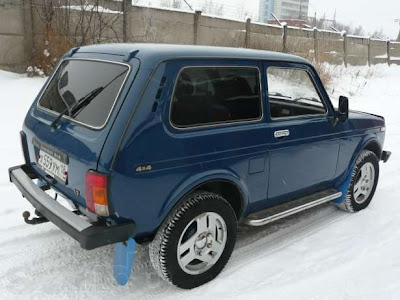 The Niva in this photo, which is not unlike mine really, down to the color but sans the fancy running boards, has wheels that make the tires--in this case the KAMA Flames--stick out. They look cool, and as you can see they do all right in the snow, but steering at slow speeds with this configuration is challenging. Parallel parking is very cumbersome, it cannot be done without breaking out into a full sweat since my model year did not offer power steering. And as I mentioned, turning abruptly is not advised. On wet pavement, driving can be disastrous. Once when going home down Heratsi Street as I was just about to enter the tunnel that passes beneath Charents Street I slammed on the brakes when I saw that at least a foot of water had collected there, and my Niva slid out of control. I was lucky no one was driving beside me in the left lane. And thankfully no one else was traveling with me. My Niva on more than one occasion has slid quite nicely on gravely or sandy pavement as well. 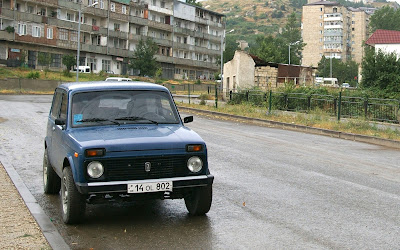 Here’s a photo of my Niva parked in Shushi taken about two years ago for another perspective of how the tires were fitted, which is absolutely the wrong way for proper performance.

I love Nivas, something about them that I cannot shake. I could not imagine driving anything else in Armenia other than a Niva or perhaps a Villis, which is a lot larger and tougher, practically indestructible on any terrain (based on the original Willys Jeep design, incidentally). I have traveled on some very arduous roads in distant parts of the country, even where asphalt had never been laid like in the mountainous terrain high above Jermuk. So now that I have a little boy I need this thing to ride as safely as possible if I’m going to keep it. Not only that, I still want it to be able to travel on any road surface without fear of losing control.


Obviously the first place to start researching is the Internet. Most of the English language sites are catered to enthusiasts in England, Australia and, yes, even the US as strange as it may seem since they were never sold on the American market. You see photos of these cannibalized Nivas with all sorts of crazy modifications made to them like these above, as if it were designed for a safari in a tropical rainforest littered with boulders and pools of mud five feet deep. So I started searching for Russian sites on which tires for the Niva are reviewed, and I found a few that gave me some leads and actually taught me what to look for. 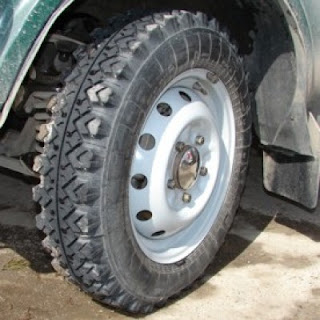 The original Niva tire was only 175 mm wide. It is known as the Voltyre VLI-5, shown here,  and is supposedly not in production any longer or else is very hard to track down (I managed to find a set of four brand new ones with the factory rims ironically enough for 120,000 dram, or $286). These things are hardcore, they were designed for roaming through fields as if rolling lazily down Newbury Street window shopping from the driver’s seat. They look like they belong on a mini-tractor. My spare tire is a VLI-5, and I never once used it.  The have poor rolling resistance and thus are terrible if you're looking for good gas mileage (who isn't).  They are also notorious for being very noisy, so although they may be excellent for off-roading, they’re unpractical.

There is also the VLI-10, the tread design of which doesn’t seem to be very unlike the KAMA Flame--they’re made at the same tire plant after all. Alas, those like the Flame are also bad on wet pavement. Other solutions were good in the mud and snow, but not necessarily so on normal roads, and vice-versa.

I wanted to find some additional information about one tire I saw on a page that had a poor description, and a search for it led me to the web site that had just what I wanted--a side-by-side comparison of the leading tires used on the Niva today, thanks to the experts at Auto Review magazine (Газета АВТОРЕВЮ). These guys examined everything, from the depth of the tread to performance and life of the tire. And thanks to Google Translate, I made perfect use of the highly informative, detailed article, albeit with a few snags here and there.

I obviously narrowed my selection to the two top contenders--first the K-156-1 Niva 4x4, considered to be the best tire ever made for the car by the reviewers, with long resistance to wear, deep zig-zagging treads and capable handing on virtually all road conditions. The ideal tire, designed specifically for the Niva. And I found out the other day that they don’t make them anymore--seems the tire factory went out of business and there’s supposedly none to be had. They are the Holy Grail of Niva tires.


Next on the list was the Kama-232, which like the K-156-1 is an all-season radial 185 mm wide. New Nivas actually roll off the assembly line with this tire. According to the review the 232 has excellent performance on wet pavement, with a score of 10 out of 10 for handling and braking. That should be reason enough to buy a set. The minus, and it’s a huge one, is the short life on these tires--they estimate that after 15,000 kilometers the original grove depth--7.7 mm--will have been whittled down to just four.  Oh well, they stop and steer flawlessly on both wet and dry roads, and perform great in the mud, to boot. Why don’t I just drive down to Sears or Costco and…

Oops. I’m in Yerevan. No mega stores here but one, aptly called Mets Aniv (Big Wheel). Call to them tells us they’ve got none. So much for being big.

The only way to shop for certain things in Yerevan is on foot. Okay, fine, shopping for anything at all has to be done on foot, beating on every door on the block. And I mean every door. When you need tires, you go to the street where everyone sells them. Luckily that street, named after the writer NAR-DOS, is only a half-mile down the road from where I live. And the kinds of shops on this street transform quite suddenly, every one or two hundred feet, even less. The further you walk, you will see stores selling tile of all kinds, then bathroom fixtures, then doors, and eventually coffins…

So this is the conversation I repeated only 9 times (it was a good day).

“Do you have tires for the Niva, you know, Russian?”

“Yes, come this way” or “No, we only sell foreign name-brand tires here.”

The store that came to my salvation was oddly enough the first one I walked by but didn’t enter, thinking they couldn’t help only judging by the thirty-foot long wall of highly expensive 16-20 inch alloy wheels. They were selling rims for Porsche Cayennes, which are not in short supply cruising Yerevan’s pristine, silky asphalt streets (not!). So on a whim I go in there, anticipating being turned down within ten seconds. They looked at me skeptically thinking I wouldn’t like what they had, then pointed me to the corner. Jackpot--four fresh Kama-232s on the original factory rims. Apparently some guy who just purchased a brand new Niva preferred spending some ungodly amount on go-fast tires and just left them there. Now the real challenge--would they be willing to take my Flames off my hands, which still had ample tread on them, along with the crappy rims (the paint on these things was chipping off and they would fall into the tire well, which infrequently but annoyingly caused one or more to go flat, and my having to fill them with air using a pedal pump). After some hemming and hawing, they offered me 20,000 dram for the set. Bingo!

It feels like I’m driving a totally different car. I never knew the Niva could handle so well, especially after a new wheel alignment. It makes turns effortlessly, no pulling, no skidding or shuddering, and overall performance, particularly maneuvering around obstacles, has vastly improved. Stopping is excellent. And I've found the car to actually be nimbler, quicker to accelerate. The tires have more of a bounce to them, so the ride is not as rough as it was with the other wheels--at times I felt like I was driving two horses from a buggy. The pot holes don't feel ten feet deep any more, the slight bumps in the road are no longer obvious to the derrière.  It just shows you how obsessed Armenians are with showing off, coveting image more than safety. I’ll take the latter, thanks. Areg appreciates the new Kama-232s as well.
Email Post
Labels: Personal Experiences Photography Travel