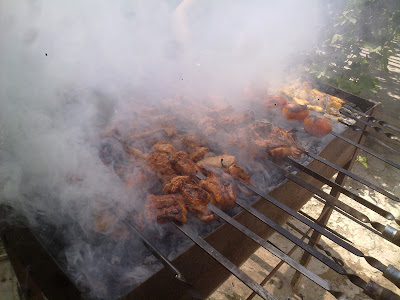 It was my father-in-law’s 59th birthday last Thursday. What a better way to celebrate during the weekend than barbecue--the much coveted khorovadz?

We were all off to Dzoraghpyur on Sunday morning, the designated day for feasting and libations. He had marinated the meat the night before with his secret spice mix and prepared the onion-parsley-sumac condiment mixture commonly used for kebabs, which always brings out the sweetness from the meat that is otherwise indiscernible.

Levon's meat of choice is pork, which is preferred by most Armenians as I’ve seen in my 9 years of participating in barbecue rituals. He chose mostly short ribs and some tenderloin. But the trickiest part of a successful barbecue as any chef knows is not necessarily in the cut of meat but in the fire. Depending on how you spread the coals and how far the flames are from the savory meats suspended over it, you will end up with either succulent, tender flesh falling off the bone or hunks of chewy carbon, insipid and void of any properties promoting well-being.  Some people insist on thoroughly cooking the pork to exorcise the meanies, while others have enough sense to know that medium to medium well works nicely. Even Gordon Ramsay attests to that. 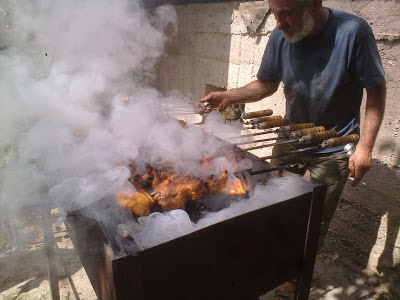 The skewers of choice are flat and a foot and a half long, about a quarter of an inch wide, perhaps less. Ours have wooden handles, which aside from looking sharp allow turning them to be less hazardous, decreasing the probability of finger burns. Some old-school ones are narrower and V-shaped, and much shorter. If the handle is not made of wood the end is usually curled in a loop, which facilitates hanging the skewers vertically from an iron rod in the tonir, the sacred in-ground clay fireplace in which lavash is traditionally baked.  And since no one’s looking, why not sample some of his uncle’s chilled fruit vodka--a secret blend of mulberry, apricot and grape. 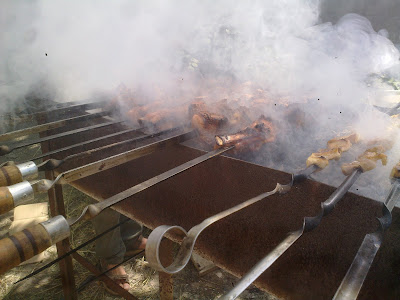 But before any meat goes on the fire the veggies must have their moment. First ones on the flaming dried grape vines and twigs of oak are the Italian eggplants, which unlike the bulbous ones found in American supermarkets are long and thin, not unlike bananas in shape only dark, inky purple. And they will burn, make no mistake. Usually the skin is so withered and ashen by the time they come off that they seem ready for the trash bin. But once the women start peeling away (yes, that's their job) with a bowl of water on hand to cool the fingers, a squid-like limp mass reminiscent of aubergine is revealed. Being an eggplant lover I tend to think it’s most always overdone, but naturally, I keep that to myself so as to not start a tedious debate.

While the meat is on some space off to the side is saved for the tomatoes and sweet peppers. My father-in-law being a gourmand of sorts grills hot finger peppers in advance at home, then bottles them in oil to prevent spoilage. That way, there’s no confusion, mouth clutching and gasping at the table. The women were told to remove the puckered skins from the tomatoes while still on the skewer, and they complied dutifully without fail. 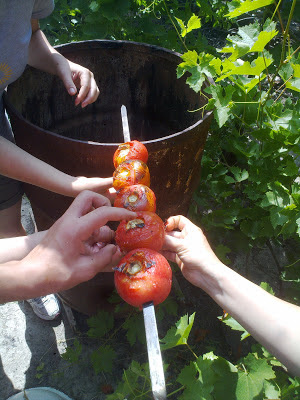 And while this was all happening of course the boy decided to bathe. He has yet to realize the generational, folkloric significance of the birthday khorovadz. Perhaps he’ll get the hint by his third year in our illuminated lives. 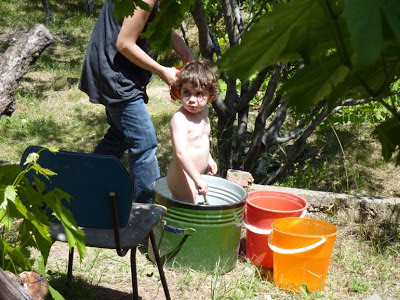 rusydi said…
no food like that in indonesia. it seen delicious. that right?
Tuesday, August 13, 2013