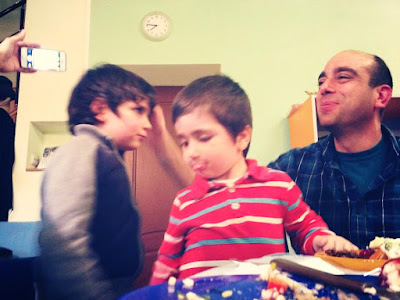 On a recent trip to Paris I found myself thinking of my two young sons nearly every corner I turned in search for the perfect crepe sandwich in the Latin Quarter or an appealing, modest glass of Côtes du Rhône. While I toured the city on the Big Bus I kept imagining what they would ask me as it approached the Arc de Triomphe for instance, or how does one get to the top of the Tour d’Eiffel. Each time I bit into one of three or four croissants consumed during the day I imagined them eating their own alongside me, completely content, speechless in delight. They were with me on my metro rides, ecstatic to be on a train, and they were with me at the bistro, pleading with me to move on. Sometimes I wonder whether I am obsessed with my own kids, and whether that obsession—if that is even the proper word—is healthy for a man my age—a middle-aged divorcé.

Being a single father in Armenia indeed has its challenges. Modern Armenian culture—within the republic, anyway—does not accept the father as a sole caretaker. For two years after my wife moved out I found myself having to prove to society that I could handle parenthood on my own, without the micromanaging Armenian mom hovering in the background. Fathers are not supposed to cook and clean for their children—that’s the mother’s or grandmother’s job. Fathers might play with the children at home. They might carry them to the park, cigarette dangling from the mouth, spitting phlegm along the way. They aren’t expected to wipe their kids’ asses and pick up after them. They discipline with idle threats of beatings and bullying. Some parents threaten their kids with claims that they would suffer a heart attack out of shock, for instance when they suddenly break out into a sprint down the sidewalk. Fathers bark out humiliating orders—come here, sit, stay, don’t run—in the most reviling way. Some are offended when their children want affection, by hugging their knees for instance. Don’t do it, they respond, behave. Some Armenian dads never seem to smile.

I find myself compelled to break this conventional stereotype every day I am out in public with my sons. Not only do I chat with them in a casual, carefree manner as I would with my own friends, I give them near constant affection, by putting my arm around their shoulders and holding them close, grasping their tiny hands in mine, sometimes growling like an ailing mutant wolf-seal in their ears. I aim to be a model father while trotting down the wide, Caucasian oak-lined sidewalks on the way home, as if to demonstrate how it’s done to all the bitter farts that may be watching.

I don’t mean to brag, but for a 45 year old man in Armenia I look good, at least 10 years younger. Many Armenian men, by the time they reach my age, look at least 60, out of shape, usually obese, smoking thin cigarettes, wearing a perpetual grimace, screaming into their cell phones to some sorry sod that is compelled to hear them rant about missed payments and petty feuds related to disastrous business transactions (“where’s the money”, “I said that you must…”, “I swear on my mother/father, if you don’t do this…” blah, blah). I don’t dress like Armenian men and I certainly don’t go shopping where they do. They all seem to dress alike, wearing the same charcoal gray padded jackets, some longer than others, some with wider patterns than others. They wear blacks and faded or bright blues for contrast. They sport thin, striped crew-neck sweaters at least one size too small to accentuate their curves. They crop their hair short, no matter how low the hairline, as if they just stepped out of a time/space wormhole originating from the 1950s. And they don’t smile. When they do share humor with each other, it’s about some inside joke between them that isn’t funny to begin with, probably not even to them, but they have to go through with fawning appreciation for the joke, or the potential it could have had. By default, they’re gruff and discontent. When they are out and about with their kids, it seems like a chore, as if they’re going to have teeth extracted. The warm intimacy between father and child in public is disturbingly seldom. 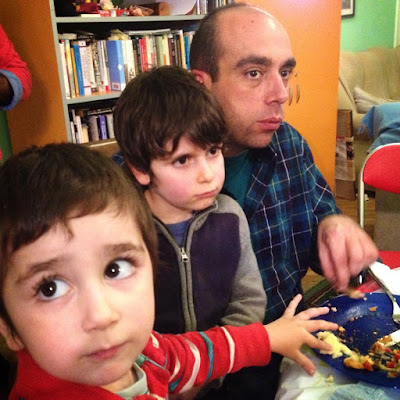 And, being a single dad, meeting women is also a challenge for me. They don’t understand why my ex and I couldn’t work it out, or why we split with two small boys in the picture. My status as single father is a red banner that binds me taut like a sarma.

I would like to start a club of single Armenian fathers in Yerevan but the membership would likely include all but one man. Sometimes I wonder where the long-term support is for guys like me, emotionally attached to their kids, no relationship prospects, destined incompatible with any and all women (although there’s that amazing corporate-level CPA who lives only 7,247 miles away). The fact that I consider myself a relatively young, active single father of two young boys is enough reason for women to run away shrieking. Never mind that I have a history of being a cantankerous, moody, major pain in the pass (although I’m mellowing, really). Dating has always been awkward for me. Dating has led me down the paths of disastrous relationships with women with whom I shouldn’t have been socializing to begin with because there was no common ground on subjects that were of such supreme importance to me. I had been willing to sacrifice my personal musical tastes in hopes that compromise would lead to long-term gains on emotional and spiritual levels. Now I cannot imagine being in a relationship where my partner does not have any appreciation for John Coltrane’s music. This has become my bar to set. If after a few dates at the most if I realize that the woman I’m courting is indifferent to Coltrane’s music, then it’s time to stop. What’s the point of dating someone who isn’t moved by the trance-inducing “My Favorite Things” or, particularly, the sacred, symphonic work “A Love Supreme?” There’s simply no use. I haven’t met one person worth my while who has listened to “A Love Supreme” from start to finish and wasn’t moved by it. Better to stay home curled up with Chi Chi, and drink a hearty Armenian red blend or Kozel Pale out of half-liter bottles, and munch on shelled walnuts, sulghuni cheese pressed sandwiches, dark chocolate, Gemlik olives, labneh sprinkled with crushed mint and cayenne pepper or zaa’tar and drizzled olive oil. That’s way better than an insipid date. The only problem is that it gets old after a while. So I try again, and become disappointed again so I can appreciate anew how good I had it. You learn to weigh the seemingly insignificant things in life. Will it be a shimmering, intoxicating plate of labneh or a shitty wine date with an unexpectedly shallow woman? Labneh, by all means. I remain faithful to my labneh.

But what I tell myself each morning is that the only thing I can control in my personal life is to be the best father I can be. That’s enough. Never mind the idyllic romantic relationship that won’t pan out. I am a dad of two amazing, funny, extraordinary children. They have my name, and the family heritage continues. They are learning about their roots, they are just starting to understand where they come from. They know both English and Armenian fluently, for their age, and are picking up Russian. My older son even discerns the nuances of Western Armenian versus Eastern. They know two cultures—east and west. They have two extended families located both east and west. They love Hot Wheels and Spider-Man and Play-Doh and Ernie and Bert. They love their commie cartoons and all the other commie kids stuff that Armenian parents are still into but I don’t get and never will. They love their spaghetti covered with supermarket canned Parmesan cheese that I buy two for five bucks on each trip to Boston. And yes, they dig Trane. That’s enough.
Email Post
Labels: Personal Experiences Thoughts and Musings